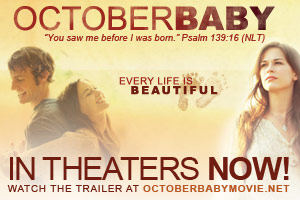 
This Friday a movie opened entitled "October Baby". Basically, it is a movie about a young girl who finds out that an attempt to abort her failed and that she was subsequently adopted (and, thus, she embarks on a journey to reconcile with her biological mother). It's a film about looking life in the eye, acknowledging its brokenness, and learning to live anyway. In other words, it has a very "pro-life" theme (in the transcendental sense, not the political one).

I saw this film last night and I can attest that it is a powerful story.  Cinematically, it isn't perfect, but by the end of it you won't really care.


Given the current climate in western media, it is somewhat of a miracle that a movie like this would be produced and so I believe it important to support it to show the entertainment media (i.e. Hollywood) that we want more movies that address topics like this to be produced. It's especially important to support a film during its opening weekend as box office numbers during an opening weekend often determine if similar films will be produced.

Please take the time this weekend to see this film.  I guarantee that you won't regret it.

P.S. If the link isn't active for you, the website for the movie is http://www.octoberbabymovie.net/
Posted by Fr. Dominic Petan at 9:23 AM 1 comment:

I the undersigned, Dominic Charles Petan, son of William and Josephine Petan, of the Diocese of Lafayette-in-Indiana, having presented my petition to the Bishop for receiving the Order of Presbyter, do now, as Sacred Ordination is at hand, having diligently weighed the matter before God, testify under oath that I am not motivated by any force or fear in receiving this Sacred Order but ask for it of my own free will and choice because I believe that I am truly called by God to do so.

I assert that one and all of the duties flowing from this Sacred Order are fully known to me, which duties I willingly accept and propose with God's help to carry out most diligently all the days of my life.

Especially I swear that I clearly understand the implication of the law of celibacy and that I freely embrace it and will keep it faithfully with God's help until the end of my life.

Finally I faithfully swear that, according to the norms of the Sacred Canons, I shall obey most faithfully in all the matters which my superiors command and the discipline of the Church demands and that I am prepared to give a good example in word and deed, relying in the hope that I may be rewarded by God for receiving this Order.

So I affirm, so profess, so I swear; so help me God and these holy Gospels which I touch with my hand.

19 of my brother deacons and I made this promise before representatives of the Church (i.e. our seminary Rector) and the seminary community, along with oaths of faith and fidelity to the Church, as the last canonical step towards ordination to the priesthood.  Once I receive the formal "call to orders" from my bishop, there will be nothing formal standing in between me and ordination.

I'll just take this opportunity to thank all who have supported me over the last six years and have made it possible for me to be here at this time and in this place, ready to fulfill the good work that God has called me to.

Please join me in praising God for his abundant mercy!

Ok kids, time to fire up your translators!  Here is my homily for the 4th Sunday in Lent.  It was written and given in Spanish to the Hispanic community of St. Joseph's parish in Dale, IN.  Enjoy!

Jesus turns over the familiar

Greetings friends!  Here is the homily that I preached this past weekend in Jeffersonville.  I am particularly sure that the Holy Spirit was directing this one because even though I had no contact with whoever it was that wrote the Prayers of the Faithful for the parishes at least half of them matched up almost perfectly with different aspects of my homily.  Praise God for that!


Familiarity breeds contempt… at least that’s what the modern proverb says.  What this saying is, well, saying is that as we come to know someone more deeply, we realize just how much we actually don’t like that person; that is that with familiarity comes knowledge not just of the person’s attractive traits, but also of their more ugly ones (and we all have them, don’t we).  I think, in a certain sense, we can all see some truth in this saying.  But there’s another aspect of this saying that also carries some truth: that is, that familiarity also breeds complacency.


We can see this in our daily routines.  If you’ve lived in Jeffersonville for some time, the landmarks that you used to notice as you went about your daily tasks—such as taking the kids to school, or making a run to the grocery store, or even just commuting to work—after a while just kind of fade into the landscape.  After years of living in this one place, you might even find that the features of your neighborhood no longer seem to register in your consciousness.


This can happen with people, too.  Our co-workers, classmates, close friends, brothers and sisters, and even our spouses become so familiar to us and part of our daily routine, that the appreciation of how special they are to our lives is not something that enters our daily consciousnesses.  And so, while this familiarity doesn’t necessarily breed contempt, it does often breed complacency.


In the first reading today, we heard the recounting of the Ten Commandments.  For many of us, I suspect that listening to these being read is kind of like making our daily commute: we were conscious that we began the trip, but when we got to our destination we weren’t quite sure how we got there.  In other words, the Ten Commandments are perhaps so familiar to us that they’ve become “part of the landscape” and no longer impact our daily consciousness.


And this is nothing new.  The ancient Jews also fell into this trap.  They had the Law for many years and most people were very familiar with it and its demands.  Thus, following the precepts of the Law had become for them like our daily routine: nothing more than part of the daily landscape through which they had to navigate.  And this to the extent that they turned what is called the “Temple Cult”—that is, the sacrifices offered in the Temple both in homage of God and as an atonement for sins—into a business for profit.


That’s when Jesus breaks into the scene and disrupts the familiar.  He saw the way that Satan had distorted the truth that the Law represented—that is, that it was a way for God’s chosen people to remain in “right relationship” with Him—and turned it into a Law of cold demands and business transactions.  Jesus saw that this had become so familiar to the people that they simply accepted it as the conditions for living as the People of God. By turning over the tables of the familiar, Jesus was hoping to reawaken in them an awareness of the true relationship that God had called them to.


The zeal with which Jesus desired that the Temple—his Father’s house—be free from defilement is the same zeal that he has for our hearts.  He wants to turn over the tables of the familiar in our hearts and drive out any distorted images of self, of others, of God, and of what God asks of us so that we can once again see the beauty of the relationship he has called us to: both collectively as the People of God and individually as adopted sons and daughters.  Yet, unlike the Temple, Christ cannot just burst into our hearts and start turning things over.  God created us for freedom and for him to do so would violate that dignity.  And so this Lent—as he does throughout the year, but particularly in this holy season—Jesus calls us once again to open our hearts to him and to give him permission to shed light on anything in them that is unholy, that is untrue, and thus to drive them out, so as to purify his “temples of the Holy Spirit.”


My brothers and sisters, if all we have done this Lent is take up our old familiar practices of prayer, fasting, and almsgiving, then we have little more to hope for when we arrive at Easter Sunday than a feeling of relief for not having to maintain these disciplines any longer.  The challenge we have before us today is to make this Lent different by “opening wide the doors to Christ,” which was the clarion call of our late Holy Father, Bl. Pope John Paul II.  We do this by turning our gaze away from ourselves and towards others.  In prayer, we ask God to show us ways that we can overcome our sinful habits by turning towards our neighbor and offering a word of encouragement, a gentle correction when they need it, a helping hand in their difficulties, and a humble acknowledgement of how we’ve hurt them in the past that is accompanied by a sincere desire for forgiveness.  Then we return to God, offering him our successes and our (inevitable) failures and asking again for the grace to recognize our weaknesses and to trust in his help to overcome them.


This work, of course, is uncomfortable.  It is uncomfortable because we have to give up our control to Christ and make ourselves vulnerable to him and to others.  But that’s ok, because, as our current Holy Father, Pope Benedict XVI has said, “the world offers you comfort, but you were not made for comfort; rather you were made for greatness.”  My brothers and sisters, this Lent cannot be just about “sticking it out” to the end, but rather it must be about achieving the greatness we were made for.  And so, let Christ—the Christ we encounter here in the sacrifice we offer and in the meal we share—turn over the familiar in your hearts.  If you do so, then you will be truly ready to encounter anew the joy of Easter.

Labels: familiarity, greatness, holy father, homily, Jesus, john paul II, Lent, pope benedict, ten commandments
Newer Posts Older Posts Home
Subscribe to: Posts (Atom)
"This is the one whom I approve: the lowly and afflicted man who trembles at my word." ~Isaiah 66:2b