Posted by Fr. Dominic Petan at 2:22 PM No comments:

"King of the Hill" through service

Retreat and commentary on religious art

This past week I was on a silent retreat (Church Law says that each priest must make a retreat annually) and my associate pastor was generous enough to agree to preach all of the Masses this last weekend so that I didn't have to worry about that when I came home.  Thus, I have no homily to post this week.

My retreat was at the Cardinal Stritch Retreat House on the campus of the University of Saint Mary of the Lake in Mundelein, Illinois.  It was a great week.  The retreat house was originally built as a a retreat house for priests of the Archdiocese of Chicago (though now others can make retreats there).  It is well appointed and the chapel was a very prayerful place.  It is a neo-classical style interior and has obviously been minimally touched since it was originally built (renewing carpeting and seating surfaces, but keeping the original design).

I was particularly struck by the statuary and so I wanted to make a comment.  I found the image of Christ, over the tabernacle, to be one of the most "manly" looking Christ images I've seen in a long time (possibly ever!).


The picture I took overemphasizes the "manliness" of his facial features, as the lighting causes shadows to fall on his eye sockets and cheek bones.  Without the lights, you can see that his eyes are blue and are gazing heavenward in a "less-stern" look.  Regardless, here Christ is dressed in regal garments, and his posture exudes strength.  He's in complete control of his emotions.  Compared to most of the overly-expressive images that many more modern images portray, this image shows Christ as strong and in control.  It's an image I want to think about when my life gets out of control!

Two images flank the tabernacle on either side: the Virgin Mary and Saint Joseph.  And while they are obviously of the same design, the artist managed to portray sublime manliness in Joseph and sublime womanliness in Mary. 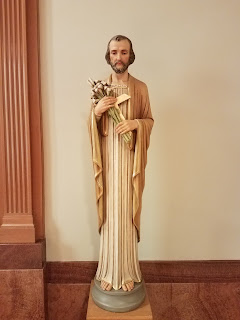 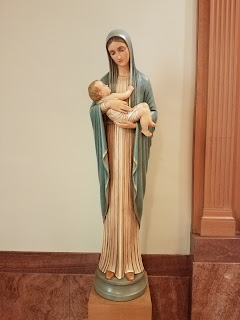 Joseph stands with strength, while Mary stands strong, but with obvious motherly tenderness as she gazes upon her Son.  This in spite of the fact that, from the waste down, they are essentially the same statue.  Again, when I look to Joseph and Mary, these are the qualities that I look for in them and to see images that express that elegantly greatly helped me enter more deeply into prayer.  Along with the overall unity of the chapel as a whole, these helped make the chapel a place of deep refuge during this last week.

I offer these this week simply to invite you all to consider what the art in our sacred spaces is truly doing for our prayer.  Does it reveal the truths about what we believe and about who God is (who Christ is) and about who the saints are?  Or is it simply about making some artistic statement, disconnected from the purpose of the building as a whole?  Too often, I think we get caught in the latter idea.

And so, here's to good art!  And here's to all those who produce it and preserve it!  Finally, a big thanks to all who made sacrifices so I could be away this past week to find rest and renewal.  May God bless you all!
Posted by Fr. Dominic Petan at 11:57 AM No comments:

Human dignity and the mission of the Church

Posted by Fr. Dominic Petan at 3:52 PM No comments:

Posted by Fr. Dominic Petan at 4:11 PM No comments: