The mercy that we need, but don't always seek

Ah, it's always good to go back and remember how God worked in your life!  I hope that by sharing my experiences others will see some working of God in their lives.

And please let this be a plug for our Parish Mission!  It's like a "big-tent revival" that other Christian communities celebrate.  Attending a parish mission turned me on this journey to priesthood.  God can use this mission to turn you towards his perfect plan for your life, too!

The return of the imagination...

It was one of those weeks when I didn't feel like I had adequate time to prepare for this homily.  I had an idea of what I wanted to preach about but wasn't sure that it was the right direction to go.  Then this video by Fr. Robert Barron popped up and confirmed for me that I needed to preach on this topic.  Enjoy!

The grace to give thanks

Thanksgiving is still more than a month away, but can we get on board with the idea of giving thanks everyday?  Here's to hoping that we can...

The unprofitable (yet faithful) servant

I kind of went with the Spirit on this one, which didn't have a lot to say directly to "Respect Life Sunday", which the Church in the United States celebrates today.  I hope, however, it does help you respect your life more deeply and understand that the reward for our faithfulness will not come in this world, but in the next; and so perseverence in faith, even in the face of despair, is perhaps our most important virtue. 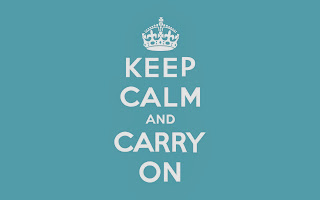 Hold tight to faith and keep carrying on!

* Portions of these paragraphs were either paraphrased or directly copied from the Scriptural commentary "Preaching the New Lectionary: Year C" by Diane Bergant with Richard Fragomeni, published by The Liturgical Press, Collegeville, Minnesota, copyright 1999.  The selection can be found on pages 383-384 of the book.
Posted by Fr. Dominic Petan at 8:58 AM No comments:

This past Saturday, I had the joy of celebrating a Mass of Thanksgiving for my Aunt Fran and Uncle Dick on the occasion of their 50th wedding anniversary.  50 years for any couple is an amazing achievement, but when it happens in your own family it is something special.  It was great to see so many of my cousins and their families, whom I rarely see these days, and to be able to offer Mass in thanksgiving to God for the grace that has sustained Aunt Fran and Uncle Dick these past 50 years.  Below is the homily I gave for the Mass. 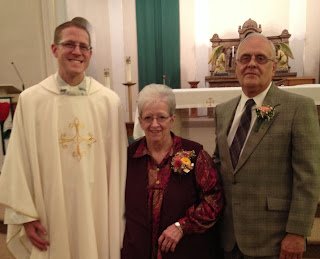 Here's to many more years of faithful perseverance in love!

King Saint Wenceslaus' commemoration was last Saturday.  When I pondered the readings for Mass I couldn't help but think of the old song Good King Wenceslaus.  It actually fit quite well, so I went with it.

This week I'll return to Joliet to celebrate my aunt and uncle's 50th wedding anniversary!  Then, following this weekend, the priests of the Lafayette diocese will be on retreat.

Homily: 26th Sunday of Ordinary Time – Cycle C
King Saint Wenceslaus was born in the early 10th century near to a Christian father and a pagan mother.  This was a time of instability and unrest in the area of Europe known as .  On account of his grandmother, Saint Ludmilla, Wenceslaus received a good Christian upbringing.  After his father died, his mother became regent and began to implement many anti-Christian policies.  Thanks, again, to his saintly grandmother, Wenceslaus was encouraged by the people to take reign of the government from his mother and even though his grandmother Ludmilla was murdered for her efforts to promote her grandson, Wenceslaus eventually did become king.
As king, Wenceslaus worked for unity and peace throughout the region.  He strenuously promoted Christianity, even bringing priests from neighboring when there were not enough native-born priests in .  All of his work, however, only increased the fervor of the anti-Christian population in .  This faction even recruited his brother, Boleslaus.  In September of 929 Boleslaus invited Wenceslaus to the town of to celebrate the feast of Saints Cosmas and Damian with the intention of murdering the king.  On the morning of the feast, as Wenceslaus was making his way to the cathedral for mass, Boleslaus and a band of others ambushed him on the front steps of the church and murdered him.  Thus, the Church celebrates King Wenceslaus as a martyr and his feast day falls just two days after those great martyrs of the , Cosmas and Damian.
Of course, to be such a virtuous leader, Wenceslaus must also have been a virtuous man; and that he was.  His legend recounts how he paid particular attention to the poor.  Perhaps he had read the prophesy of the prophet Amos that we read today and knew that he could not allow himself to become complacent in the comforts that being king afforded him.  Or perhaps his saintly grandmother had read him Jesus’ parable about the rich man and Lazarus, which we heard in our Gospel reading today.  And perhaps that reading awakened in him a holy fear of suffering the same, sad end of the rich man.  Either way, Wenceslaus knew that if he had, indeed, been trusted with much, that it was not for his comfort alone, but rather that he might serve the common good of the people over whom he ruled.
Many of you, at this point, might be remembering the traditional Christmas carol entitled “Good King Wenceslaus”, which is good, because that is exactly who we are talking about.  And you know it’s really not a Christmas song at all, but since the story it recounts takes place on Saint Stephen’s feast day, which is December 26th, it is traditionally sung during Christmastime.  The story is of how the king, seeing a peasant man gathering sticks in the snow to make a fire in his home, loads up his own sled with wood for a fire and food for cooking and walks with his page through a winter storm to provide this peasant man and his family a feast, literally fit for a king, for it was eaten with his king, and it shows us plainly how this saintly king remained a humble servant of the people over whom he ruled.
So, was it for virtue alone that Wenceslaus did all of these things?  I would venture to say “no”.  Rather, I believe Wenceslaus could see in his own state of life an image of Jesus, who, though he was lacking in nothing as the Second Person of the Holy Trinity, nonetheless was not complacent in his “comfort” and, when he saw us languishing in sin, responded to the prompting of the Father and left off his comfort to come among us—amidst the winter storms—to bring us warmth and nourishment.  No, I think Wenceslaus knew that this was the way that God had called him to be united with Jesus—and not just Jesus, but Jesus crucified—as the particular way that he could “lay hold of eternal life”, in those great words from Saint Paul that we heard in our second reading today.  “But you, man of God, pursue righteousness … compete well for the faith … lay hold to eternal life, to which you were called…”  No, Wenceslaus didn’t do it because he wanted to be better than all the other kings in Europe; but rather because he saw the special opportunity to draw closer to the “King of all kings”, our Lord Jesus Christ, and so he left the comfort of his palace to serve the poor man so that he might not feel alone. ///
Yesterday I heard the confession of a young person that impacted me.  In it, this young man confessed having not reached out to some students at his school who seemed to be marginalized.  Once I heard that I thought, “Man, this kid gets it.”  He gets right to the heart of what this week’s readings are talking about.  In fact, he gets right to the heart of what Pope Francis has been talking about in his first six months as pope: that we need to go out to the margins of our communities—that is, out from our “comfortable spaces”—in order to draw in those whom we find there.  Why?  Because that is exactly what Jesus did for us.  And that is exactly where we will find Jesus.
The last phrase of the carol “Good King Wenceslaus" sums this up beautifully.  It says:
Therefore, Christian men, be sure
Wealth or rank possessing
Ye who now will bless the poor
Shall yourselves find blessing.
Let us, then, my brothers and sisters, heed the words of that beloved carol and, strengthened by this Eucharist, let us “seek the Lord where he may be found”: in our brothers and sisters who long to feel that sense of belonging; and we, too, will find that, in bringing the love of Christ to others, we will receive that love in return.
Given at All Saints Parish: – September 29th, 2013


The Feast of the Archangels Michael, Gabriel, and Raphael
Posted by Fr. Dominic Petan at 7:35 AM No comments: