The difference a year makes...

A friend of mine who is approaching her first wedding anniversary wrote that in an e-mail to me the other day and I realized that today, October 30th, is the one-year anniversary of my first chemotherapy treatment. At the time, I had no idea how it was going to turn out. And now, only one year later, I know how it turned out. I took the treatments well, I completed them without a hitch, and I achieved remission (...all through God's grace, of course!). One year ago today, I was wondering when or if I would get really sick, and when I'd lose my hair. Today, I ran a 5K and have a full head of hair (and then some!). What a difference a year makes, indeed.

So, am I better for it? Unqualifiably, yes. Would I have ever asked to do it that way? Heck no! But that's the best part. Something I would have never chosen or planned for helped me to grow in ways I couldn't have imagined when it all began. Some of the happiest people I know learned this secret a long time ago, but I share it with you here and will leave you with a challenge: Instead of trying to force everything to be the way you plan it to be, how about letting go and seeing where those challenges to your plans lead you? Try it for a year. You never know what a difference a year can make.
Posted by Fr. Dominic Petan at 10:36 PM No comments:

Ok, I know that I pulled you all into this new blog with the promise that I would update more, but I didn't foresee how some of the events of the past weeks would hinder my ability to update by keeping me quite busy. {excuse mode off}

A few weekends ago, the town of Ferdinand held it's first annual Folk Festival. It was a one-day event that featured a bunch of different local arts and crafts, information about healthier eating through organic and more natural foods, food booths from local merchants, and (as you all might guess from its name) live folk music. I went mainly for the music and was really impressed with Sarah Siskind. She's written songs that Alison Krauss and other significant artists have recorded but I think her voice certainly holds up on its own. Nevertheless, I was also impressed with the vender booths (though I couldn't afford to buy anything on my limited seminarian income) and the delicious food offerings (ok, so I could afford to sample some food). It was a gorgeous day in southern Indiana and I look forward to next year's festival. Check out pictures here.

About a week after that, my younger sister, Denise, was married to Jason. I don't have any pictures from that day yet (I didn't need to take any, there were plenty of people taking pictures for me). I saw so many people that I hadn't seen in years. Not just cousins and aunts and uncles, but also people from the neighborhood that I grew up in back in J-town. It was really neat to connect with a lot of those people. Some family members who I don't think I've ever met were there. Cousins from my father's side (Fabbre) were there. We've had so little connection with that side of the family (they've always lived so far away) that it made it special to connect with them, especially since I am now officially the last Petan! I'm happy for my sister and pray that she and Jason will grow in love each and every day.

I've been playing a lot of "catch up" after having been gone from the seminary for the weekend of the wedding, so I haven't had time for much else. One of my favorite little "treats" here at the seminary, though, is making a Saturday "pilgrimage." I start by waking up early to pray Vigils and Lauds (morning prayers) with the monks (they pray at 5:30 a.m.), then I walk to the Monte Cassino shrine chapel, which is about 1 1/4 miles from here, where a monk will celebrate mass at 7:00 a.m. I get there just in time to pray a rosary before mass with some of the local people who come every week. After mass I walk back to the seminary to have breakfast and start my day. The pilgrimage starts before the sunrises and finishes as it's making it's way into the day. It's usually a pretty peaceful walk and it's a good time to reflect on the week that has passed. I made this trip last week and snapped a few photos along the way. 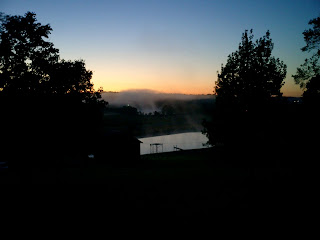 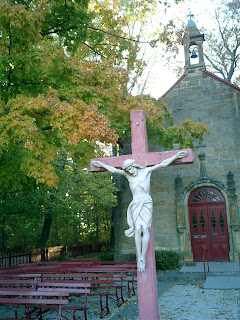 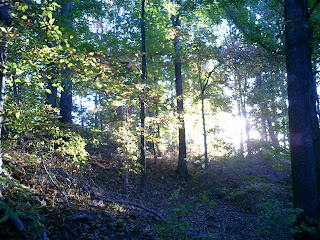 Well, that's all for now. As always, thanks for your prayers!
Posted by Fr. Dominic Petan at 12:44 PM No comments:

Labels: ferdinand, folk festival, monte cassino, pilgrimage, sarah siskind, wedding
Newer Posts Older Posts Home
Subscribe to: Posts (Atom)
"This is the one whom I approve: the lowly and afflicted man who trembles at my word." ~Isaiah 66:2b